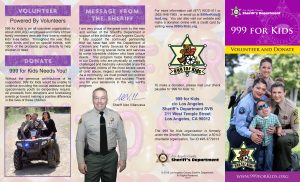 If Children Need Assistance, 999 for Kids Steps Up

Its name is a reference to a law enforcement radio code: 999.

“999 for Kids” was created in 1985 through a joint effort of the Los Angeles County Sheriff’s Department and the County’s Department of Children and Family Services. The two county agencies began working together after they recognized a need to help physically and mentally challenged children who are medically vulnerable or are victims of the most severe cases of child abuse, neglect and family violence.

The program raises money to purchase special items and services for these children, including sport wheelchairs, computers, special education classes, medically oriented toys and games. The funds send children to summer camps for the deaf, blind, and those with other medical issues who would not otherwise have such positive experiences.

Many deputies and their colleagues in other law enforcement agencies support 999 for Kids on their own time, too, holding fundraising events including an annual team relay swim from Catalina Island to Cabrillo Beach in San Pedro.

According to Lieutenant Jodi Hutak, “Swimming across the Catalina Channel in the middle of the night is a physically grueling and mentally challenging endeavor.  I have been blessed with physical capabilities that these kids don’t have, so it is with great pride that I can use those abilities to benefit those who have been less fortunate in life.  Participating in an event like the relay swim, is an opportunity to raise awareness for such a special group of people, whose stories of trauma would go untold, whose challenges and triumphs would go unnoticed, whose names and faces would be unknown, and whose desperate needs would go unmet, if not for the assistance of the “999 For Kids” and the generosity of those who support our fundraising efforts.  It is an honor and a privilege to be a part of a foundation that provides these kids with the avenue to experience a little bit of happiness that so many of us take for granted.”

The children they help include people like Tyler, a 16-year-old boy who was suffering from asthma, hypertension and diabetes. He weighed 769 pounds when his needs came to the attention of the DCFS. Tyler’s weight and medical conditions rendered him non-ambulatory — and, unable to sleep on a regular bed.

When DCFS visited Tyler’s home, where his father also cares for his mother, who suffers from Lupus, they found he was sleeping on a mattress on the floor, as typical bed frames were breaking under his weight.

Esperanza Gonzalez, a Supervising Case Social Worker for the DCFS, started researching special beds that might improve Tyler’s social, physical and emotional well-being. After two months of trying to find a source willing to purchase the bed, Gonzalez contacted 999 For Kids. Two weeks later, 999 For Kids arranged for the $4,000 bed to be delivered to his home. His condition has since begun to improve and he has lost significant weight.

This is just one example of how 999 For Kids profoundly changes children’s lives. Others abound. For example, Miller Children’s Hospital in Long Beach received 54 DVD players from 999 for Kids, providing the hospital a valuable tool to help hospitalized children cope.

“We’re so grateful that 999 for Kids chose Miller Children’s for such a generous donation,” Rita Goshert, clinical operations manager of the hospital’s Child Life Department, says in a statement released by the hospital. “Watching videos serves as a wonderful distraction for hospitalized children, so this donation will help patients and their families cope with hospitalization.”

Identifying children’s needs and meeting them — that’s the goal of 999 for Kids, whether the need is for a group of children, like those at Miller Children’s Hospital, or for an individual, like Samira, who’s 17 and legally blind. She loves to write short stories, and she came to DCFS attention due to her mother’s refusal to provide necessary medical care, causing Samira to suffer from depression. The withdrawn Samira was placed in foster care, and has improved with counseling.

Upon being made aware of Samira’s need, 999 For Kids purchased a $9,000 specialized Braille machine that allows Samira to communicate and read in comfort – enhancing her experiences in home and at school.

Sheriff’s Captain Roosevelt Johnson said, “999 for Kids couldn’t do any of these things without contributions from our supporters.”

“Children who are brought to the attention of the 999 For Kids Program are the victims of the worst cases of emotional and physical abuse and neglect,” Johnson said. “Without the generous support of our donors and partners, we would not be able to provide the assistance these children desperately need. We greatly appreciate your support.”

Without the generous contributions of its supporters, 999 for Kids would be unable to continue providing the crucial assistance that special-needs youth so desperately require. All proceeds from donations and fundraising events go toward making a positive difference in the lives of these children.

To make a donation, please mail your check payable to “999 for Kids” to:

The 999 for Kids organization is formally under the Sheriff’s Relief Association, a 501c3 charitable organization, Tax ID #95-3779314