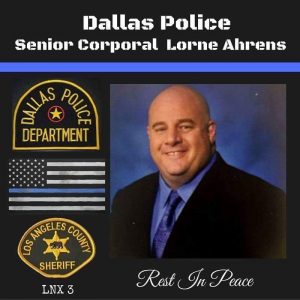 The Los Angeles County Sheriff’s Department is saddened to learn that one of the fallen Dallas Police Officers was a former member of the LASD. Former LET Lorne Ahrens Served the LASD and the residents of Los Angeles County as a Law Enforcement Technician for more than 10 years from 1991 to 2002, Lorne left the Department on January 23, 2002 and officially began his service with the Dallas Police Department just two days later. He is remembered by the LASD for serving at the Lennox and Lancaster Sheriff’s Stations as a highly regarded and respected public servant. His colleagues today at the LASD are describing him as the type of person who always had a smile on his face and greeted you with kind regard. They said he was an incredible dispatcher who served the patrol deputies in the field well by always looking out for them and taking officer safety into account when dispatching calls for service. Captain Merrill Ladenheim said, “Lorne was a big guy with an even bigger heart.” He will be sorely missed by the LASD family. Our thoughts and our prayers go out to Lorne’s family and all the men and women of the Dallas Police Department, the Dallas Area Rapid Transit Police and the great state of Texas.